Please note that as far as AgilePoint NX is concerned this article applies to Office 365 workflows only and content type level workflow association works for SharePoint OnPremises even in SharePoint 2016.

One thing is pretty clear that Microsoft did not intend to add support for addition workflow association anymore at global content type level which they have already documented but I know that Microsoft is under pressure to bring this feature back.

Please look for following line in the article

“Unlike previous versions, SharePoint 2013 does not support workflows that are scoped to a content type (SPContentType). “ 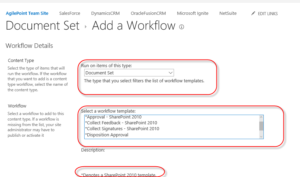 I know Microsoft is trying to work on it still and might change soon but capability is not available from Microsoft itself as of now.

Also even other workflow vendors in Office 365 cannot support content type based workflows due to same reason. This might change as Microsoft might be close to reintroducing this feature in near future but as of today it does not work.